Posted on August 13, 2012 by sensitiveeconomist | 8 Comments 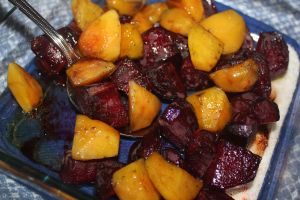 This week in our farm share box among the tomatoes, corn, cantaloupe, and basil, sat a bunch of red beets and a bunch of golden beets. I was excited to see the beets because they are an easy and tasty side dish. However, I had never before seen golden beets. They were a bit smaller than their red counterpart and their skins were a bit paler. A little research revealed that red beets grow more quickly than yellow beets, and that is why farmers tend to plant more of them.

According to the George Mateljan Foundation, beets are “an excellent source of heart-healthy folate and a very good source of the antioxidants manganese and vitamin C as well as heart-healthy potassium. Beets are a good source of digestive-supportive dietary fiber, free radical scavenging copper, bone-healthy magnesium, and energy-producing iron and phosphorus.”

I started by peeling and chopping the yellow beets into chunks. When I did this, I found that the golden beets had a nice yellow flesh with reddish stripes running throughout. Then I diced the red beets – they have such a pretty deep purple hue. I roasted the beets separately with olive oil, salt and pepper, and then tossed them together once they were cooked – that way the red beets did not change the hue of the golden ones. SensitiveHusband and I enjoyed this side dish. The beets were sweet and the golden beets were even more tender than the red ones. If you see golden beets at the store or farm stand, pick them up – you won’t be disappointed!

I am sharing this recipe with Simply Sugar and Gluten Free, Gastronomical Sovereignty and Food Trip Friday.